We are the most successful company in India having pioneered Public Private Partnership with State Government of Gujarat, Maharashtra and Ministry of Railways, Government of India. 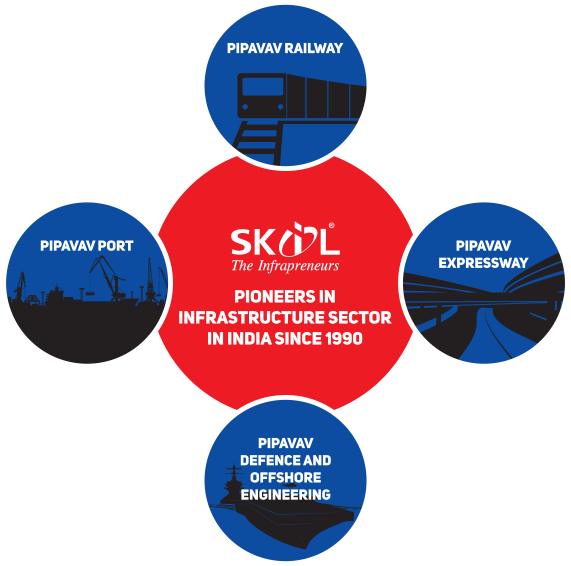 SKIL in 1991, joined hands with the Government of Gujarat to promote and develop the Port of Pipavav into a modern all weather deep water direct berthing seaport on the coast of Gujarat. Located between Mumbai and Kandla the Port Of Pipavav is the first seaport in the country to be developed in joint sector with private initiative, capital and management.

In comparison to other ports on India's west coast, Pipavav port has considerable advantages being an all-weather port and having one of the deepest drafts among the west coast ports that enables it to receive larger ships. Moreover, the port's relative proximity (compared to Mumbai and JN Port) to Northern India's hinterland as well as the port's efficiency made it highly cost-effective for cargo movements between the ports. The port is naturally protected by islands which shelter and protect it from the south-westerly waves and monsoon swells, permitting easy and safe navigation of ships.

The port received the "Best Port In Gujarat Awardâ from Gujarat Infrastructure Development Board in 1999. IDFC award for excellence in infrastructure was bestowed in the year 2000 and was also recognized as amongst top 3 emerging ports of Asia in 2002 by Llyodâs Hongkong.

In 2005 SKIL divested its stake in and ceded the control of GPPL in favour of Maersk / AP Moller Group, Denmark.

First Railway Line in Partnership with Ministry of Railways

Having initiated the port project, the most important linkage that had to be put in place was rail connectivity. SKIL took yet another unprecedented bold initiative to foster partnership with Ministry of Railways by undertaking a railway project comprising of 286 kms of rail line connecting port of Pipavav to nearest broad guage station i.e. Surendranagar under Public Private Partnership (PPP) Model. The project was executed in a record time of less than 18 months through an SPV namely Pipavav Railway Corporation Ltd. (PRCL). With this project Pipavav got connected to the rest of Rail Network of the country. It shall not be an understatement to make, that this joint venture heralded the privatization of Railway projects in the Country.

SKIL and itâs then SPV, GPPL built a 20 km Four Lane Expressway to connect the Port of Pipavav to the National Highway.

SKIL also conceived, initiated and commissioned Pipavav Shipyard, having the largest in India, and one of the largest in the world, state of the art Shipbuilding and Offshore Engineering Infrastructure. It also introduced for the first time in the country a MODULAR construction technique which results in producing quality ships with faster turnaround time. The yard is capable of building frontline warships namely destroyers, frigates, aircraft carriers, submarines etc. besides various type of commercial ships including VLCCs. It also has the capacity and capability to build and repair well head / process platforms, jack up / drilling rigs, FPSOs etc.

In a short span of time it has the following milestones to its credit:

Besides being the state of the art and one of the most modern infrastructure in the world, the scale of facility can be imagined by way of the size of its dry dock and allied manufacturing capacities and capabilities.